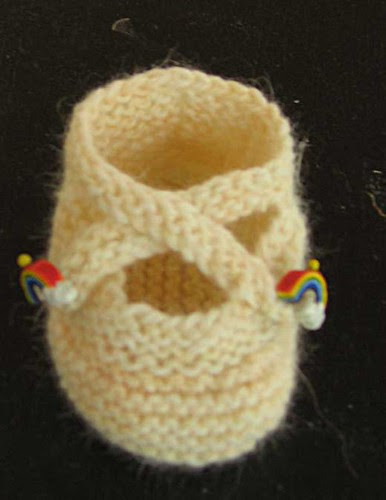 These adorable booties are the invention of a clever Dutch knitter named Saartje. They were irresistible, until I read the directions. Urk! Seams! And zillions of ends, too, whine.

Then I got to thinking that the pattern would be easy enough to adapt to the Fleegle Seamless Method. Here's an alternate method of knitting these little cuties. (The original pattern can be found here.)

Note: I emailed her twice asking for permission to post this altered the pattern, but she never answered me. I tried.

Note Again: Instructions are given for working on two circulars. DPN folks can easily convert to 5 sticks.

Row 2: Knit in the back and front of first stitch (kbf), knit to marker, make 1 using a backwards loop (m1), K1, m1, knit to last stitch, kbf (3 stitches between markers)

Row 24: Knit 10, turn, cast on 10 by knitting on*, Knit 20, Purl 31, turn.
Here you can see the finished cast-on stitches for the first strap. Instructions for the cast-on are at the end of this post. 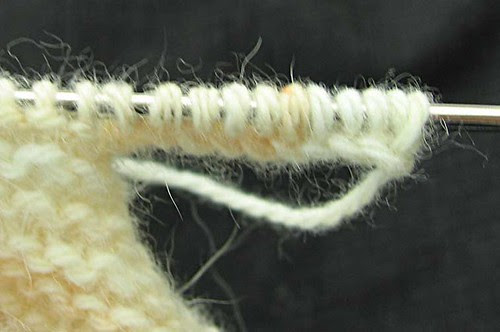 Row 26: P20, K20.
With a crochet hook, slip-stitch in the first stitch of the row below, chain 6 (to make a button loop), and put the end of the chain loop back on the left needle.

With a crochet hook, slip-stitch in the first stitch of the row below, chain 6 (to make a button loop), and put the end of the chain loop back on the left needle and slip-stitch the two stitches together. Cut yarn, pull through loop and finally...

*To cast-on via knitting on, insert the right needle into the first stitch on the left needle, knit through it normally, but don't drop the stitch. 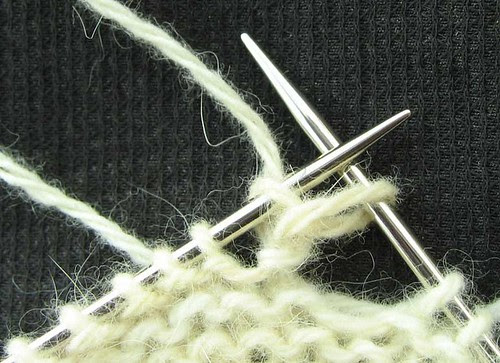 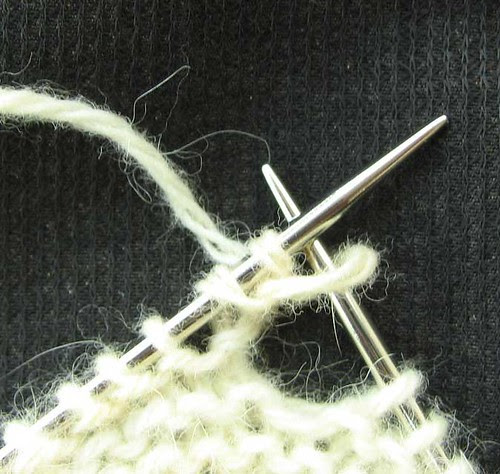 Repeat 8 more times. You should have 10 new stitches on the needle and be in position to resume knitting the next row.